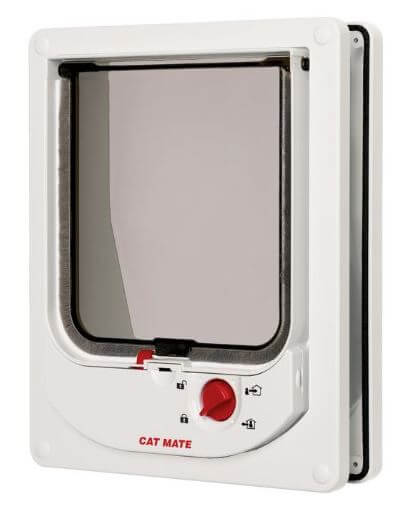 Cat flaps have become more and more popular among cat owners. This could well be down to the advancements that have been made in technology. A whole range of cat flaps now have features such as electromagnetic control and timer control. It’s no wonder then that people who have previously not been keen on the idea of having a cat flap are now feeling more open to the idea.

Cat Mate are one of the companies on the market right now that are considered to be well known for their range of cat flaps. They have quite an impressive range of models available so then all cat owners can find a cat flap that will make them happy. But how do you know which cat flap is right for you? Here we will look at four of their most notable models, while also attempting to answer any questions you may have so then you can figure out which cat flap is best for your cats.

This is probably one of the most popular models of cat flap that Cat Mate have on offer. When you look at it, it’s really not that difficult to see why it is so popular. It has a silent action, which means that it will barely make a noise, even when your cat is heading outside during the early hours of the morning. Because it is an electromagnetic cat flap, you can also lock the cat flap whenever you want so then your cat is kept nice and secure indoors with no danger of them being able to get out.

Some customers have expressed concerns that the flap does not always close properly after their cat has walked through it. In most cases however, this is probably an installation fault rather than a problem with the actual cat flap. The best thing to do is make sure that you follow all of the instructions that are provided carefully. Ensure that you check everything and that it is set up properly before you start using it, otherwise the door may end up sticking open.

“Because the magnets for the door are supposed to go on collars, do Cat Mate provide special collars?”

No, Cat Mate does not provide any collars with this cat flap. Then again, this isn’t really to much of a problem. The magnets are designed to be fastened to any cat collar, so you should be able to connect the magnet to your cat’s current collar without spending any extra money. If however you want a new collar, then you should be able to find one for a reasonable price that you think will be able to support the magnet.

“I would like to use this cat flap for an interior door. Is this possible?”

Yes, you can use this cat flap for an interior door. The installation procedure should be exactly the same, so it should work properly. All you need to do is make sure that you follow the instructions properly and you will be able to fix this cat flap to your interior door without any issues at all. 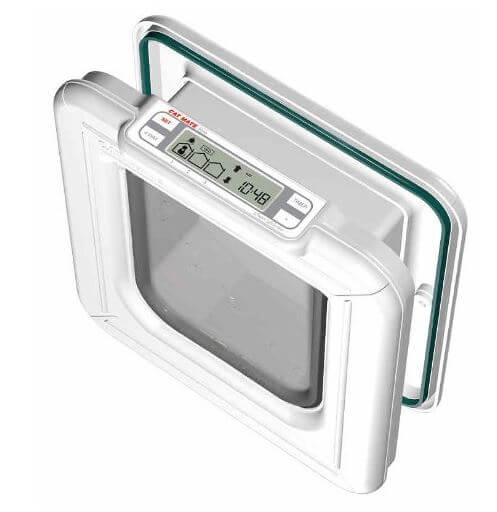 If you have had issues with other cats or indeed other animals coming into your house through the cat flap, this could well be the perfect solution to those problems. This cat flap from Cat Mate has I.D discs which you attach to your cat’s collar. Then only they will be able to get through the cat flap while other animals are stopped from coming in. It also has a time control as well so then you can ensure that your cats are staying indoors at night as well.

Some customers have complained that other animals have been able to break through the cat flap by using force. This is something that only seems to have happened on rare occasions though, so it’s unlikely that an animal will be able to force its way into your home. In the vast majority of cases, no animals should be able to break through the cat flap. It is very strong and is almost impossible to get through without the I.D discs.

“Is this cat flap able to handle big cats?”

“If my cat is outside when the timer control comes into effect, does that mean my cat will be locked outside?” 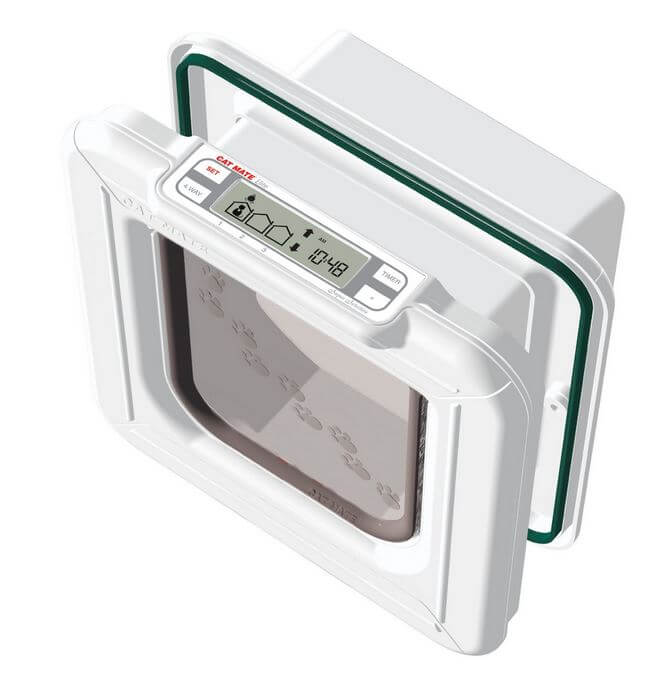 This cat flap has a lot in common with the one we have just looked at, only Cat Mate use a lot more technology with this one. This model comes with an LCD screen on top, which is able to give you lots of useful information. Using the chip that connects to your cat’s collar, it can tell you where your cat is and how long ago they used the cat flap. You can use this feature on up to three cats, which makes it great for keeping tabs on your cats when they are out and about.

Some customers who have bought this cat flap have complained that the microchip that connects to their cat’s collar works properly. They say that it works when it is used by humans opening it with their hand but not by their cat. This more than likely is down to the chip not being attached to the collar properly. Always make sure that you have attached the disc properly so then your cat can go through the cat flap without any issues. Also ensure that the cat flap itself has been installed properly before you start using it.

“My cat already has a chip in its collar from a previous cat flap. Will it work with this one?”

Yes, your old chip should work fine with this cat flap. This means that you will not have to go through the hassle of getting more chips for your cats. If you ensure that the cat flap is installed properly and the LCD display says that it is able to pick up where your cats are, then that means everything is working fine and you don’t have to change your cat’s chip.

“I have a few cats. Can I allow one cat to go through the cat flap while stopping another?”

Yes, that is one of the great things about this cat flap. You can have separate settings for up to nine cats if you like. This means that you can choose which ones are allowed in and out and which ones you would like to stay indoors. This can be very helpful when you have a cat that has been ill, or if you simply want one or two of your cats to remain indoors for the day. 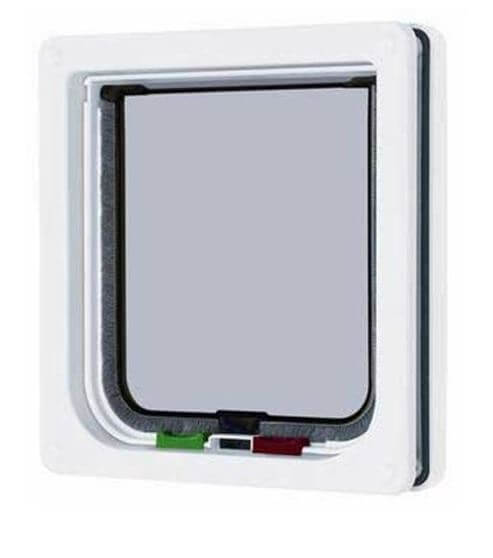 If you have a screen door but have been unable to find a cat flap that is suitable for it, then Cat Mate may well have the ideal cat flap for you. This cat flap has a nice thin frame, which means that it can be used on screen doors, or indeed just thin doors without any problems at all. It also comes with exterior rain seal and has a brush strip so then you do not have a lot of energy leaving the house whenever your cats are using the cat flap.

Some people have complained about this door not being suitable for them, but in most cases it is because they have tried to use this cat flap with a regular door. Remember that it is designed to be used on doors that are thin or on screen doors, so you should only purchase this cat flap if you want to use it on those kind of doors. If you do, then this cat flap should work perfectly for you. 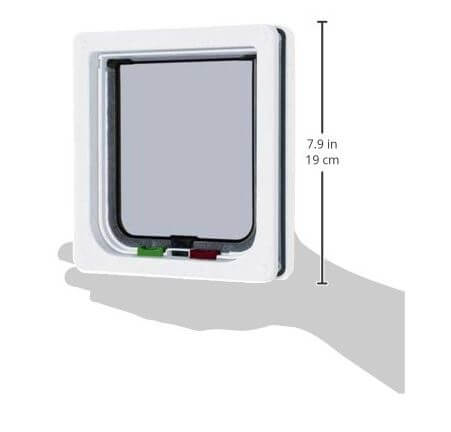 “What does it mean that it is a four-way locking cat flap?”

It basically means that it is a cat flap that has four different modes of locking. This gives you a little more control about what you want your cat flap to do. You can set it up to stop your cat’s from leaving the house once they’ve come in, or you can even lock it altogether. The four modes of locking give you a lot of control so then you can stop other animals coming in and you are able to keep your cats inside the house once they have come in.

“Can this cat flap work on a plastic screen door?”

Unfortunately, no it would not. Even though it is designed to work on thin doors and screen doors, it will only work on wooden doors. Unfortunately, plastic doors are not designed to have something like a cat flap attached to them, so it could lead to breakages or accidents. At the moment at least, Cat Mate have not released any cat flaps that are designed for use on plastic screen doors, but that of course does not mean that they will not do so in the future.

Even by looking at just four models, you can see why Cat Mate have become such a popular company to use when it comes to cat flaps. All of their models give people complete control over when their cats leave their home and prevent other animals from getting in. If having no control over the cat flap has been a concern for you, Cat Mate is clearly a company you should be checking out.