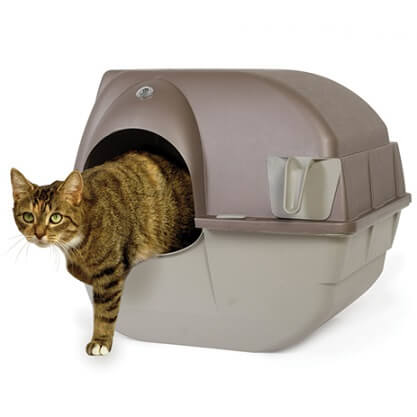 The Omega Paw Self-Cleaning Litter Box is one of the latest and more popular products available when it comes to cat’s litter boxes. There are many different designs out there that offer different features to help make cleaning litter that little bit easier. This litter box from Omega however is one of the first that has ever looked like the complete package.

But how can you be sure that the Omega Paw Self-Cleaning Litter Box is the right litter tray for you? Here we will take a look at what makes it one of the more popular models available right now,  along with answering some questions you may have about the litter box.

What Makes It Good?

Easy To Empty: The Omega Paw Self-Cleaning Litter Box does exactly what its name suggests and takes the hassle of having to scoop cat litter out of your hands. All you have to do after your cat has used the litter tray is turn it over. When you do that, the litter will fall into a tray at the top so then you can remove it and simply empty the contents into the dustbin. Put the tray back and turn it back upright and the litter box is ready to be used again just like that. Designed For All Cats: It doesn’t matter if you have a large cat, small cat, several adult cats, or a group of kittens. This litter box will be able to accommodate any number of cats. Some of the self-cleaning litter trays available on the market have small openings which means that larger cats are unable to use them. This litter box however comes with a regular-sized entryway that you find in most ordinary models of litter trays, so your adult cat will be able to fit inside just fine. 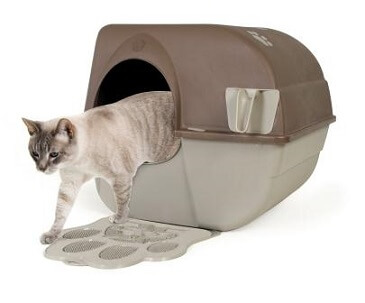 Very Cost Effective: This self-cleaning litter box is probably one of the most cost effective on the market right now. When you buy this litter tray, it doesn’t need plugging in or need batteries, nor will it require new filters. The tray inside the litter box is able to handle the job throughout the time you own it, and because you turn it over yourself, it doesn’t need any kind of power supply. Once you’ve purchased this litter tray, the only thing you will need to buy is the litter itself.

Can Cause A Mess: One of the downsides with the method of turning the cat litter box over so then the litter falls into the tray is that there is always the risk that it will brush down the sides as it falls down. This means that it could cause some of the litter to smear along the inside. For some people this will be a risk worth taking if it only leads to a little bit of cleaning afterwards, but there will be a few people who will consider this to be a considerable flaw.

Difficult To Clean: If there is a situation where you end up having to clean the inside of the litter box, then you could find this to be a very difficult task. Because of the way the litter box is built, you will probably have to take it to pieces before you can start cleaning it properly. This will be a lot of hassle, particularly if there is only a small mess that you want to clean up. In most cases however, you should be able to reach inside and clean up where necessary. It will just be a hassle if the litter reaches some hard to reach places.

“Is there a risk the cat will get dirty if I have to turn the litter box over?”

Many customers who have bought this litter box have expressed at least a little concern that the used litter will leave marks on the inside walls, thus forcing the cat to brush up against it whenever they want to pay a visit. There is a way to avoid that however by using cat litter that clumps together well. This way all of the waste will be held together tightly in clumps before it falls into the tray.

“What if my cat doesn’t like litter boxes that have a lid?”

There are many cats that prefer to the litter tray to not have a lid so they can do their business in the open air. That is not a problem with the Omega Paw Self-Cleaning Litter Box. All you have to do is leave the lid off while the cat uses the tray, and then snap the lid on for when you want to start cleaning it.

“Is it common for clean litter to fall through the grating into the tray as well?”

This is something that normally only happens when the box has been turned over too quickly. This forces the clean litter to fall through the gaps, and thus lead you to replacing the litter a lot more often than you would like. Try and turn it over slowly and the clean litter should remain in the box.

The Omega Paw Self-Cleaning Litter Box is probably one of the most inventive of its kind on the market. It doesn’t require new filters or any kind of power operation. All you have to do is turn it over and it is able to do its job. Taking into account its rather reasonable price, it makes it one of the most cost effective of its kind.