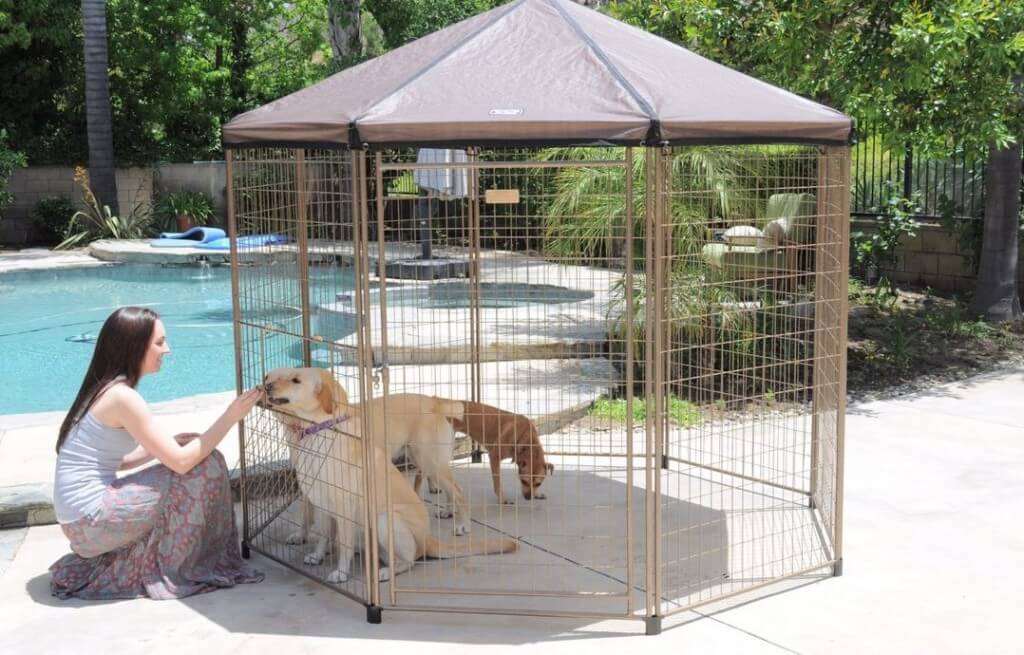 One of the problems that many people have with the range of cat enclosures on the market right now is that many of them appear to be a little small and cramped. This may not be simply in terms of the amount of surface area the enclosure takes up, but rather the enclosures height and general breathing space. Naturally, you want your cats to feel comfortable while they are outside and they might want a lot of space around them in order to breathe.

Advantek are one of the few companies that have taken this into account and have started making cat enclosures that give cats a little more room around them to breathe. They do however have several models on offer, so it’s important to find the one that is right for you and your cats. Here we will look at three of Advantek’s most popular cat enclosures, what makes them so appealing and what important questions you might be asking yourself before you purchase one. 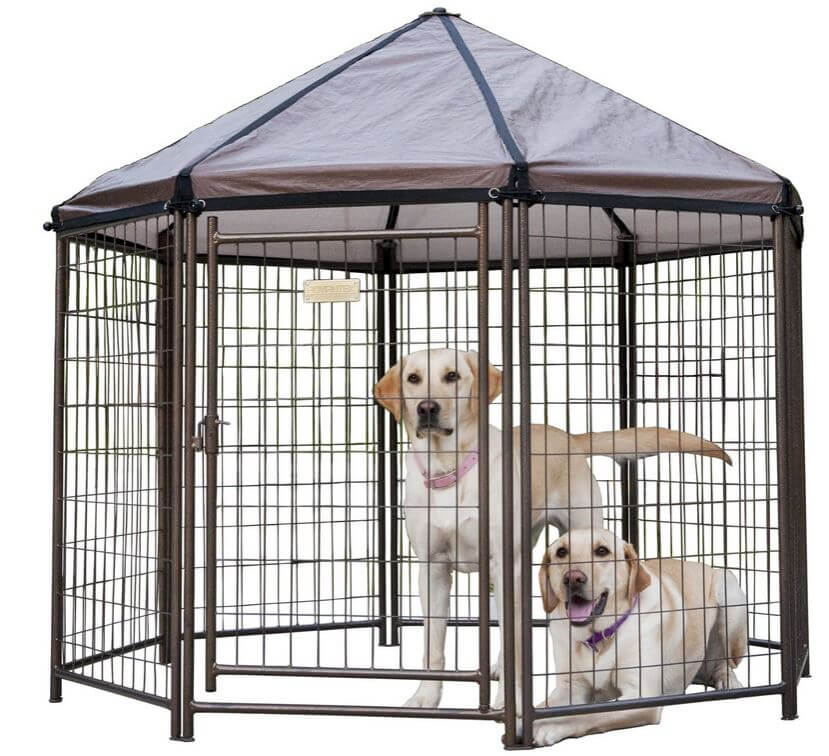 As the name suggests, this enclosure is one of the first offered by Advantek and is one of their most popular. It’s not hard to see why when you look at the sheer amount of space it is able to offer cats while still giving them plenty of room to breathe and enjoy their outdoor surroundings. It is designed to be nice and easy to set up and also includes a weather resistant cover, so you do not need to worry about having to bring the cats back inside quickly whenever it starts to rain.

Some customers who have purchased this gazebo have said that they feel it is rather easy for their pets to push over. They say that it is too light and that it can even be blown over if it is a particularly windy day. These customers however have kept dogs inside the enclosure, while cats would probably be unable to knock it over. This enclosure also comes with straps so then you should be able to keep it safely and securely upright at all times. 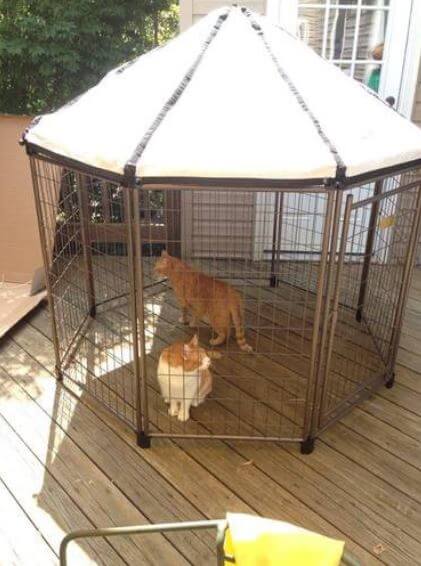 “This enclosure has both a door and windows. How do I make sure they are all secure?”

Both the windows and the door are quite easy to keep secure. They all come with two latches on each of the windows and the door. This means that you will be able to keep them all as tightly locked as you want them to be. Just make sure that you do not put the gazebo down upside down, as this can cause a problem with the latches making them impossible to secure.

“Am I able to send away for a new plastic canopy if the one with the enclosure breaks?”

Yes, you are able to get a replacement cover whenever you like. In fact, some customers have said that when they have told Advantek that the cover had broke during the first few months of ownership, they have received a new one at no extra cost. If however you have had the cover for a while, then you will probably have to pay for a new one.

This is a great enclosure to use when you want to create a nice summery atmosphere while your cats are outside. It’s design means that cats will be well protected from the weather, regardless of whether it is heavy rain or strong heat. The canopy sheet that comes with the gazebo is able to keep them protected at all times, while they still have plenty of space in order to run around and enjoy the pleasures of being outdoors.

Some people however may be a little concerned about the gaps that are underneath the enclosure. At first, it may seem like the gaps are rather large and your cat or kitten would be able to fit underneath them. When you purchase the gazebo however and you have it fully built, you will see that the gaps are quite small and it’s practically impossible for the cats to get underneath and escape.

“Would the gazebo be safe when it is on a grassy surface?”

If the animal in question using the enclosure were bigger than a cat, then it would not be a good idea to put the gazebo on a grassy surface. A bigger animal like a dog would be able to knock it over while it is on unstable ground. However, a cat would not be able to do this, so as long as it was just a cat using the gazebo while it is on the grass then it will be perfectly safe.

“How many cats would be able to fit inside the enclosure?”

If you wanted your cats to feel comfortable while inside the gazebo, then no more than three or four cats should be inside the enclosure at the same time. While there would be plenty of space left over, they may not be totally comfortable being in an enclosed space with several cats. As for kittens however, you should be able to put an entire litter inside the enclosure and they will be happy with the amount of space they have to roam around. 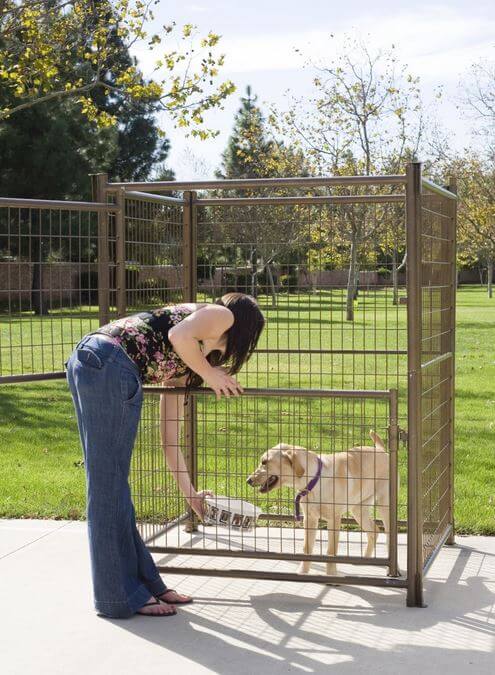 While this kennel is naturally designed with dogs in mind, it is also designed to be an ideal cat enclosure at the same time. This one is made with a thick steel frame, which is ideal for anyone that was a little concerned that metal or plastic frames would not be strong enough to keep their cats safe and secure at all times. It also comes with pet-proof locks so then your cats are safely kept safe inside the enclosure while they still enjoy the amount of airspace around them.

Some customers have complained however that the panels for the enclosure are quite complicated to put together and require a great deal of independent thinking in order to keep them all safely connected together. This enclosure actually comes with so many panels in order to increase the safety of your cats. The panels are also relatively easy to keep secure as long as they are fastened in place with something strong.

“Do I need to use tools in order to build this enclosure?”

Just like the rest of the enclosures that Advantek have on offer, none of them require you to use tools. While this enclosure may look a little complicated on the surface, it is actually quite simple to put together and should not take you too long at all. This means you will be able to have your cats enjoying the outdoors the same day you buy your enclosure.

“The doors look quite large. Does this increase the chances of cats making an escape?”

As long as the doors are kept safely and securely locked, your cats should not have the ability to escape. They do however create quite a large gap when you open the doors wide, so make sure you only open the door slightly if you are concerned about your cats escaping.

Advantek are certainly the company to go to if you want an enclosure that is able to give your cats plenty of room to breathe. The amount of space they are able to create alone will be very appealing for some people, particularly those that don’t their cats to feel like they’re trapped. Advantek are certainly worth checking out if your cat’s comfort is very important to you.